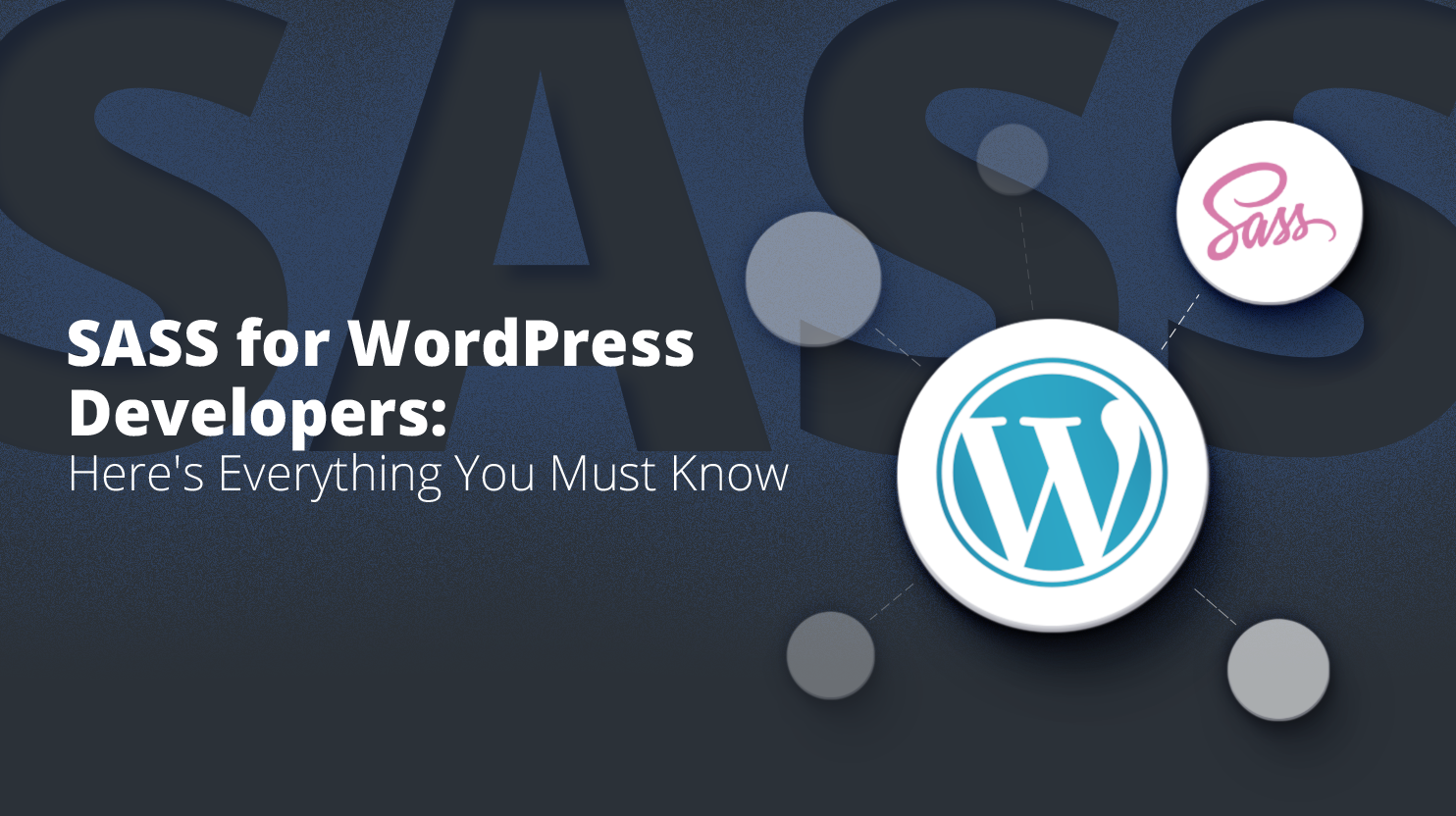 Although CSS can be fun, using proper preprocessors like SASS (Syntactically Awesome Stylesheet) – not to be confused with being sassy – will make the job of the developer even easier.

If you’re wondering why exactly you need Sass and what it’ll give you, buckle up, cause we’re going to cover all the aspects of Sass in WordPress and go over its additions one by one. But first of all, let’s make a few definitions clear.
What is Sass?

Basically, Sass is a CSS preprocessor which makes writing with CSS neater and more comprehensible, and that can solve a lot of problems. It’s a very useful tool to incorporate into your projects to make your workflow faster and better organized.

Here’s what we’ll cover in this article:

So, starting from the basics:

In which cases will WP developers benefit from Sass? 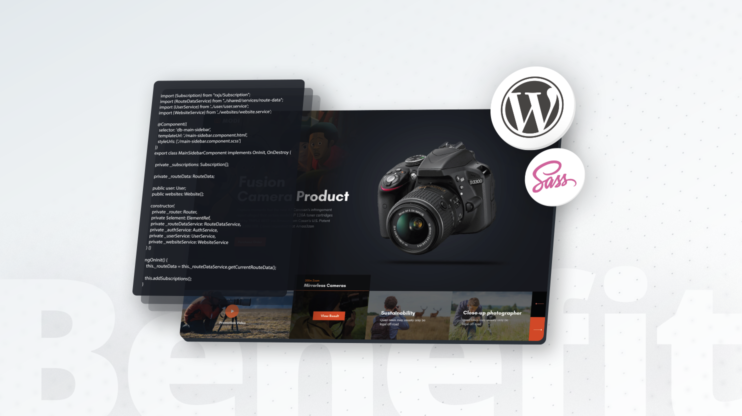 In short, in all the cases. If you want your code to be cleaner and significantly easier to follow, Sass for WordPress is indispensable.

If you want to code faster and avoid spending too much time on tedious repetitions, again, Sass comes to help. Basically, it’s like a shortcut to better coding. Talking about shortcuts, don’t forget to check out our blog on the 68 keyboard shortcuts for WordPress to make your overall workflow with WordPress more efficient.

Is Sass too much for a WP plugin?

Sometimes if you’re working on a small website or just creating a WP plugin, Sass can be a little too much. Although it definitely saves your time in many ways, it can still be a bit of an overkill.

That being said, don’t forget that Sass uses the same syntax as CSS, so at the end of the day, it’s just a tool to add extra functionality to your CSS and won’t hurt at all, no matter the size of your project, just one time clsetup and configuration should be made for Sass.

What additions does SASS bring to CSS?

These are the features Sass adds to CSS to make your work easier:

These are the additions through which Sass makes your work easier. We’ll discuss each feature in more detail below:

One of the most important features of Sass in WordPress is that it allows you to use variables. This lets you define a value and store it in a variable in order to use it in your Style files later on. Although it’s a simple tool, having it at your disposal significantly facilitates your workflow.

So, let’s say you want to use the same color or font or any other CSS value throughout your coding. Just store it in a variable and then reuse it whenever you want to. Remember that SASS uses the $ symbol for the variable. Here’s an example of variable use in Sass vs CSS:

As you see, with Sass, you can define the $font-stack and $primary-color variables in the beginning and then use the variable throughout your code. For instance, if you’re doing a project where you should use brand colors in every second line of the code, using the variable will make your work easier, as you won’t have to write the value stored in it every time, like in CSS.

Sass also comes in handy when you need to make your code more readable. In HTML, for example, there’s a very clear visual nested hierarchy which CSS lacks. With Sass, you can nest your CSS selectors in the same way as you can in HTML. Here’s an example of nesting used in SASS:

As you can see, the ul, li, and a selectors get nested inside the nav selector, which makes your CSS code more organized, clean, and easy to read.

As you know, browsers only read JS, CSS, and HTML languages which means that in the end you need to convert your Sass code to CSS to make it compatible with the browsers. Here is where compilers come in handy. Once your Sass compiler is installed and configured, you can convert Sass to CSS using the sass command in your terminal.

Then you can tell your Sass which file you want to build from and where to output your CSS. For instance, if you run sass input.scss output.css in your terminal it would take a single file (the input.scss) and convert it to a CSS file (the output.css).

Now, in Sass you can decide how you want your files to be compiled. You have the ability to create partial Sass files that have small snippets of CSS that you can later include in other Sass files.

This way, you can choose whether you want your files to be compiled individually, or you want to work on them separately but then convert them into a single file. If you choose the latter, you can use the partial Sass file by using the underscore _partial.css in the name of your file.

This underscore tells Sass that the file is a part of a larger file and should not be turned into a separate CSS file. You can use the partial Sass files using the @import or @use rule. Here’s a more detailed explanation of how the @import rule works.

In short, partials are a great way to organize your Sass in WordPress files and maintain a good file architecture. It also saves you a bunch of time trying to find the right styles to modify. One useful pattern you can try to follow for your folders and files is the 7-1 pattern introduced by Hugo Giraudel.

Now when you split up your Sass into different parts with the @use rule, it will start to load the Sass file as a module. That is you can refer to its variables, functions, and mixins in your Sass files with the help of namespace which is based on your file’s name. Тhe file you use will also include the CSS generated in your output file.

As you can see, this makes your workflow more organized as you can define variables in separate files and then import them into a different Sass file.

Another useful feature in Sass are the mixins. There are a lot of aspects in CSS which make code writing a little tedious. A mixin helps you avoid it by creating a group of CSS declarations which you can later on reuse throughout your coding. There’s also the ability to pass in certain values in order to make your mixin even more flexible. One example when mixin use is appropriate is the vendor prefixes. Let’s take the example of transform.

In order to create a mixin, you should use the @mixin directive and then name it. In this example our mixin is named transform. There is also the $property variable which is inside the parentheses to let us pass in a transform or basically anything else we want.

Once your mixin is created, you can use it as a CSS declaration which starts with @include and then is followed by the name of the mixin.

Finally, one of the most useful features of Sass is the @extend. This feature helps you share a group of CSS properties of one selector with another.

Here’s an example from Sass:

Here’s another example where a set of messaging for errors, warnings, and successes is created using the placeholder classes which go along the extend feature.
Basically, a placeholder is a special type of class which is only printed when it’s extended. In the end you can compile your CSS in a neat and clean way. Let’s take a look at the example below:

In addition to placeholder classes, although you could extend most of the simple CSS selectors, we still recommend using the placeholders in Sass as it’s the easiest way to ensure that the class you’re extending is not nested somewhere else in your styles, which would cause unintended selectors in the CSS.

The last feature in our list is the operators. Sometimes it’s very helpful to do the math in your CSS, and that’s why this Sass feature adds a number of useful math operators, such as +,-,*,/ and %. In the example below you’ll find some simple math calculations to find the width for aside & article.

In this example, we’ve made a simple fluid grid which is based on 960 px. With operations in Sass, we convert pixel values to percentages without too much of a hassle.

Are there WordPress themes using SASS?

Although there are a lot of fast and good themes for WordPress,if you work with SASS it is good to know whether the theme is using SASS too or not. In fact, there are a lot of WordPress themes which use Sass. In fact, if you want to start using Sass in WordPress, the easiest way to do so is to pick a theme which already uses it. A good examples of such a theme is the Underscore theme. Here’s a list of other good Sass-integrated themes from Themeforest, which you can start with.

Is there a WordPress starter theme with Bootstrap SASS and Grunt workflow?

Yes, you can check the Roots starter theme, or you can make your own starter theme. To do so, select the sassify in the underscores.me, which is a new feature. You can also check the Bones – The HTML5 WordPress Starter Theme.

Where can I find the SASS folder in my WordPress website?

There is no separate folder which keeps all your Sass files in one place. There are separate Sass folders for each project you work on.

How can I integrate SASS with CI?

If your projects are not using external build tools, you can compile the local and then push that compiled CSS up. You can use Gulp to compile your SCSS. You can also use Webpack Mix in your starter theme which is more easy to set up than the webpack.You can also integrate the Sass compiler into CI and version control system, so that it compiles sass into css during each push.

In short, even though CSS has everything you need for creating a stunning website, using CSS preprocessors like Sass will make the process of creation much easier and hassle-free. Sass for WordPress makes the CSS much more powerful by letting the developers use a bunch of useful features such as variables, nested rules, mixins, modules, partials, extends/inheritance and operators. In the end it will compile your code and provide a CSS output for the browser to be able to read it.