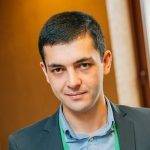 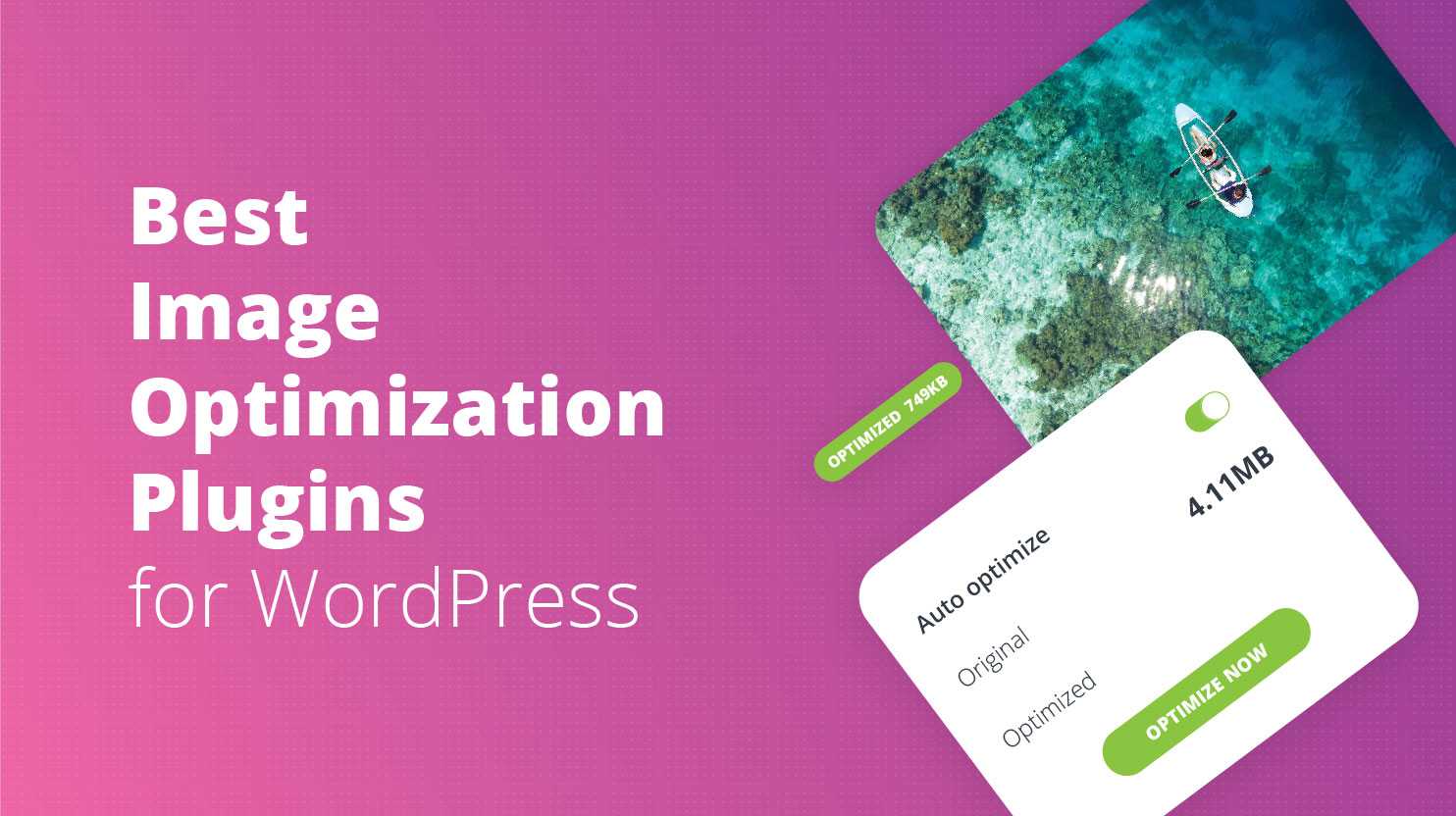 Why optimize images in the first place?

Images often account for most of the data downloaded online, so if you constantly use high-resolution images on your website it can cause several issues, all particularly notable for smartphone and tablet users:

The solution to these issues is optimizing your website’s images. There is a number of techniques for image optimization on the web, but today we will focus on solutions available for websites created with WordPress.

Images can be optimized in a few ways, but the most popular way is compression, reducing the pixels and consequently image size without significantly impacting the visual quality.

The difference between a high-resolution image and its compressed version will be unnoticeable for the human eye.

There are several image optimization plugins in WordPress and in this post, I am going to introduce three most popular plugins (WP Smush, EWWW and Compress JPEG & PNG images) in comparison with each other and with 10Web Image Optimizer. Let’s discuss the plugins one by one. 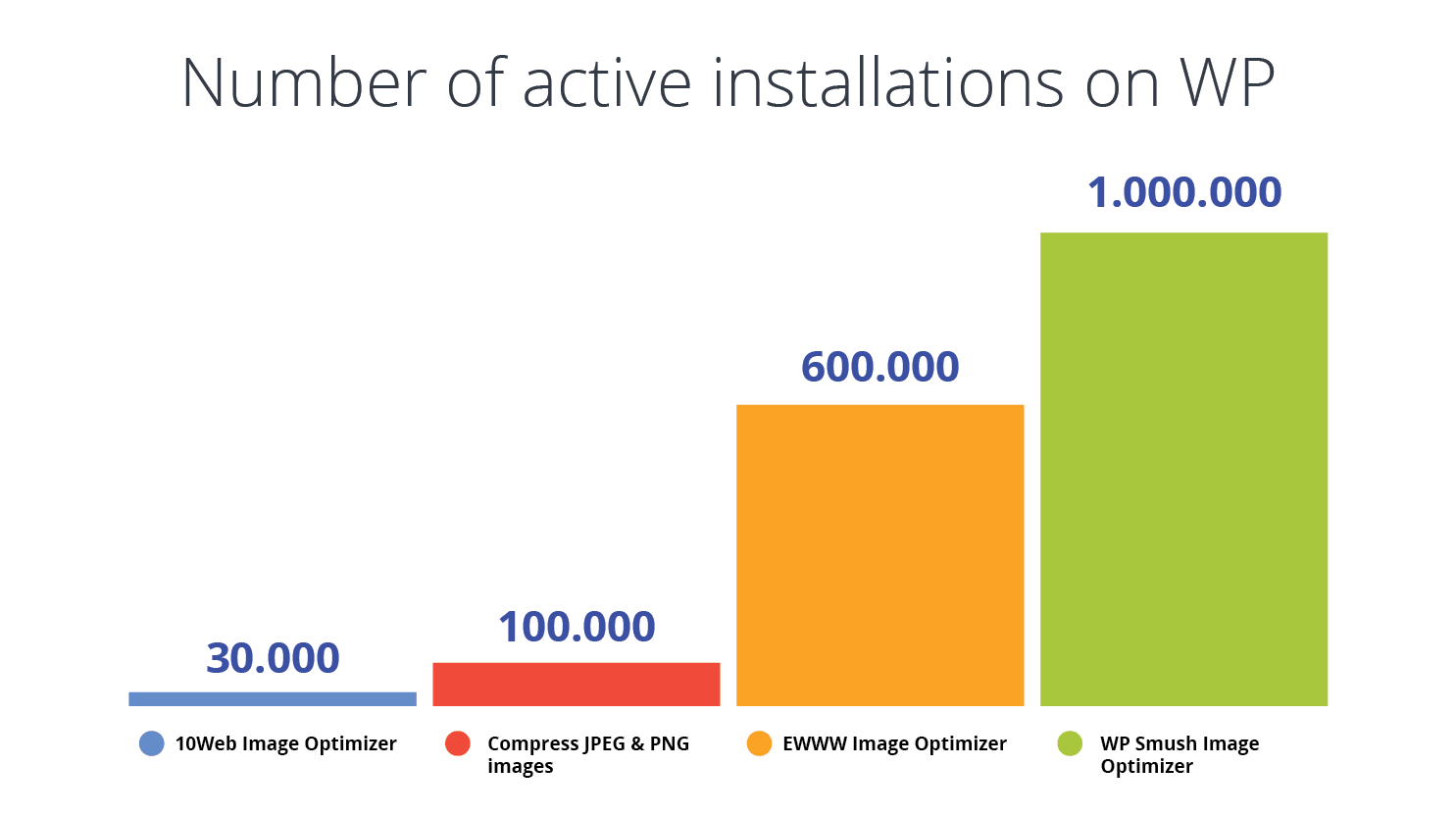 10WEB Image Optimizer is a newly developed service powered by a free plugin with more than 30,000 active installations and a 4.7 average user review score.

You can use it both on your 10Web dashboard and the regular WordPress dashboard.

Installing this plugin, you’ll get a new tab in your left-side WordPress menu where you can access all the optimization settings. There are Easy and Advanced modes of settings.

In the Easy mode, which is the default, you can choose one of the three compression options: Conservative (lossless), Balanced (lossy) and Extreme (maximum lossy).

You can also enable/disable the auto-optimization of your images and bulk optimize your media library.

For more settings, you will need to switch to the Advanced Mode.

The service is entirely free. It offers 150000 compressions per month, and all of the functionality is available.

You’ll be able to use lossless, lossy, and maximum lossy options, resize them, convert from one media type to another, auto-optimize as soon as a new image is added to the media library, perform scheduled optimizations, and more.

Whatever your image optimization needs are, this optimizer will be an ideal solution and cost exactly nothing.

Installing the Image Optimizer, you can get the other 10Web services: Security, SEO, Backup, Website Speed Test, Analytics & Report, as well as technical support. With one of the paid 10Web plans, premium managed hosting, 50+ premium plugins, and a drag-and-drop website builder will be available as well.

All the services and plugins will be possible to manage from the 10Web unified dashboard, with the option to add multiple websites.

The optimizer itself offers all 150000 compressions per month, along with the additional tools, such as PDF Optimization, Extreme Compression mode, and Optimization Scheduling.

There’s only one plan for 10Web Image Optimizer: the $0 plan.

Oh, but these are just words. You can click this button below, get started absolutely for free, and see for yourself!

WP Smush is the leading image optimization plugin by WPMU DEV in WordPress with more than 1 million active installations and 4.8 user review score.

WP Smush is very popular because of its simplicity of use.

Installing this plugin, you’ll get a new one-page dashboard in your media tab, where you can completely control your image optimization process. With this plugin you can optimize JPEG, PNG, and GIF images.

The free version of WP Smush has limited functionality, offering only a lossless compression, which compresses images by around 5 to 10%, depending on image size.

It will let you resize your full size images, setting a maximum width and height options.

You should also be able to bulk optimize your images, but this option did not work very smoothly during our bulk optimization test. It skipped several images from the bulk, which we then optimized by additional bulk or single-image optimizations.

The bulk optimization is limited to a maximum of 50 images at once in the free version.

There’s also an option to auto-optimize your images, as soon as they are uploaded to your media library.

The premium version of the plugin can be purchased after a 1-month free trial.

However, you can’t purchase only this plugin from WPMU DEV, and will need to sign up for the full WPMU DEV membership, which includes all their plugins and add-ons.

With the paid version, you will be able to “Super-Smush” your images, which stand for maximum lossy compression and achieves image size reduction from 35 to 70%, depending on original image size.

The bulk optimization will work for an unlimited number of images. With the paid version, you’ll also be able to make a copy of your original images as well as convert your PNG images to Lossy JPEG.

The pricing of WMPU DEV memberships is quite straightforward but pretty high compared to competitors. The membership’s $49/mo, charged after the end of the one-month free trial.

With more than 600,000 active installations, EWWW image optimizer is the second most popular image optimization plugin in WordPress, but its user review score is 4.4, the lowest among competitors.

After installment, the plugin will automatically optimize any new image uploaded. You’ll have to run bulk optimization for all the images that you already had in your media library before installing the plugin.

The settings of the plugin can be configured from a new page, which can be accessed from the settings tab. There are several sub-pages for fully setting up the plugin, but the main settings are set in the basic settings page.

In the media library tab, you’ll have another page, which will allow you to bulk optimize your images.

The free version of the plugin offers an unlimited number of compressions, but limits them to lossless compressions that reduce image size by 5 to 10%.

However, in some cases, when your server does not have all pre-compiled binaries installed, the plugin will not work at all.

With the free version you’ll also be able resize your images as well as convert from one media type to another.

There are three options to purchase the paid version of the plugin. And although, it was not an easy task for me to understand the features of each option quickly, I determined that in each option the price per compressed image is set to $0.003, but in one case you’d need to subscribe monthly while in another purchase a fixed bundle for a prepaid amount.

This plugin will automatically compress any image on upload after you install it, however in contrast to EWWW Image optimizer, it majorly slows down the upload process.

The settings of the plugin are available in the media settings, and there’s another page in the media library, where you can process the bulk optimization of all the images that have been uploaded before the plugin’s installation.

The free version of the plugins can be used to access the full functionality of the plugin, but only for 500 compressions, which is sufficient for 83 images if each of your media gallery images has six sizes.

Only a Maximum Lossy compression is available for JPEG & PNG images, which reaches up to 84% image size reduction. The maximum image size in the free version is 5MB.

The premium version of the plugin has maximum file size of 25MB.

The pricing scheme of Compress JPEG & PNG images is quite simple: they give 500 compressions per month for free, $0.009 for the next 9500 compressions, and $0.002 after 10,000 images per month. You’ll be charged at the end of the month based on your monthly number of compressions.

In the bulk optimization page, you’ll able to see the estimated cost, calculated for your entire media library.

In order to measure the effectiveness of each plugin and compare them with each other I got the paid versions of all three and ran optimization tests for various media types.

Knowing that JPEG is the most commonly used image type on the web, I have started with it and will present it in more detail. I conducted two tests: 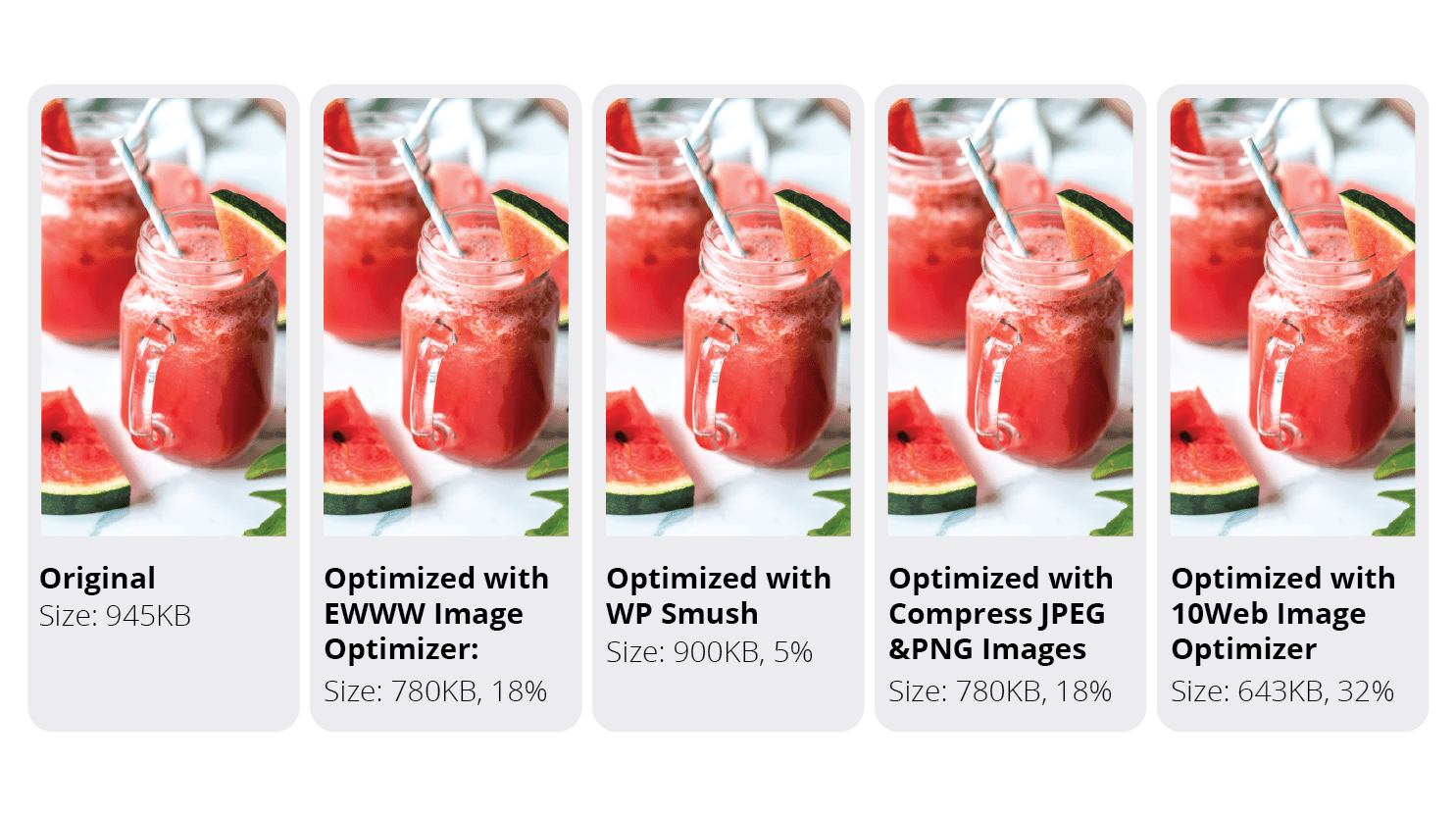 As you see, it’s impossible to distinguish the original image from its compressed versions.

Then why not optimize them and have better website performance?

You can also see that WP Smush demonstrated the poorest optimization level, only around 5%, while others had much higher percentages. 10Web Image optimizer wins out here, leaving its competitors far behind.

Test 2: I selected two sets of bulk images and recorded the respective levels of optimization and the duration in minutes.

For each of the optimizer, I recorded the level of optimization in percentages and the duration of the bulk optimization in minutes to demonstrate the effectiveness and efficiency of the plugins. Let’s take a look at the results.

I measured the level of optimization when choosing the maximum lossy optimization option for each plugin without resizing the original images. The results are summarized in the chart below. 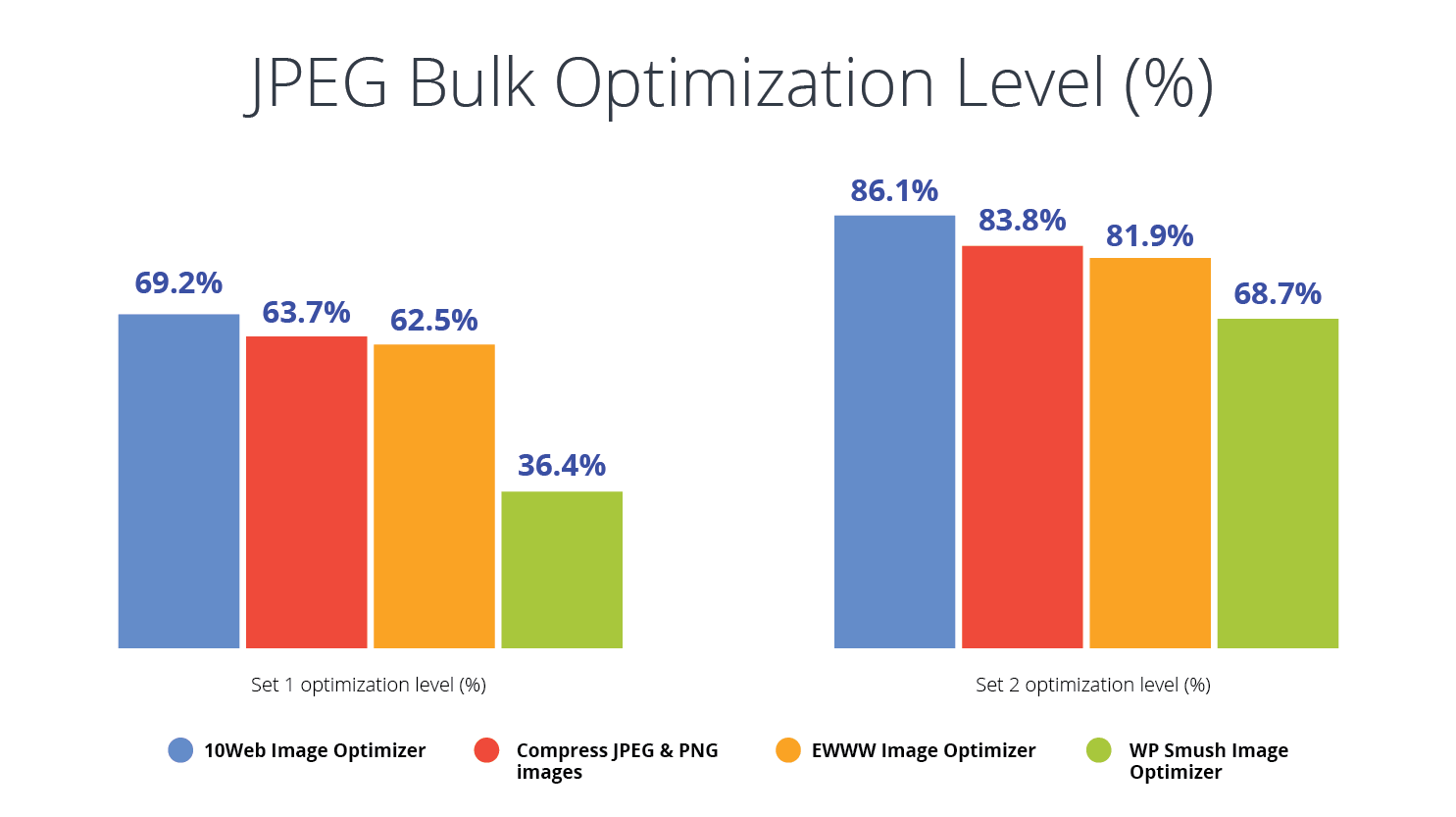 Set 1, that of already small and medium-sized images, was predictably optimized less than Set 2.

EWWW Image Optimizer and Compress JPEG & PNG Images tied for close second place, but in both cases the optimization level of WP Smush was significantly lower than those of the rest.

This is an important indicator, especially for the users who regularly optimize large or numerous images. See bulk optimization duration for each plugin in minutes in the chart below. The results were quite significant․ 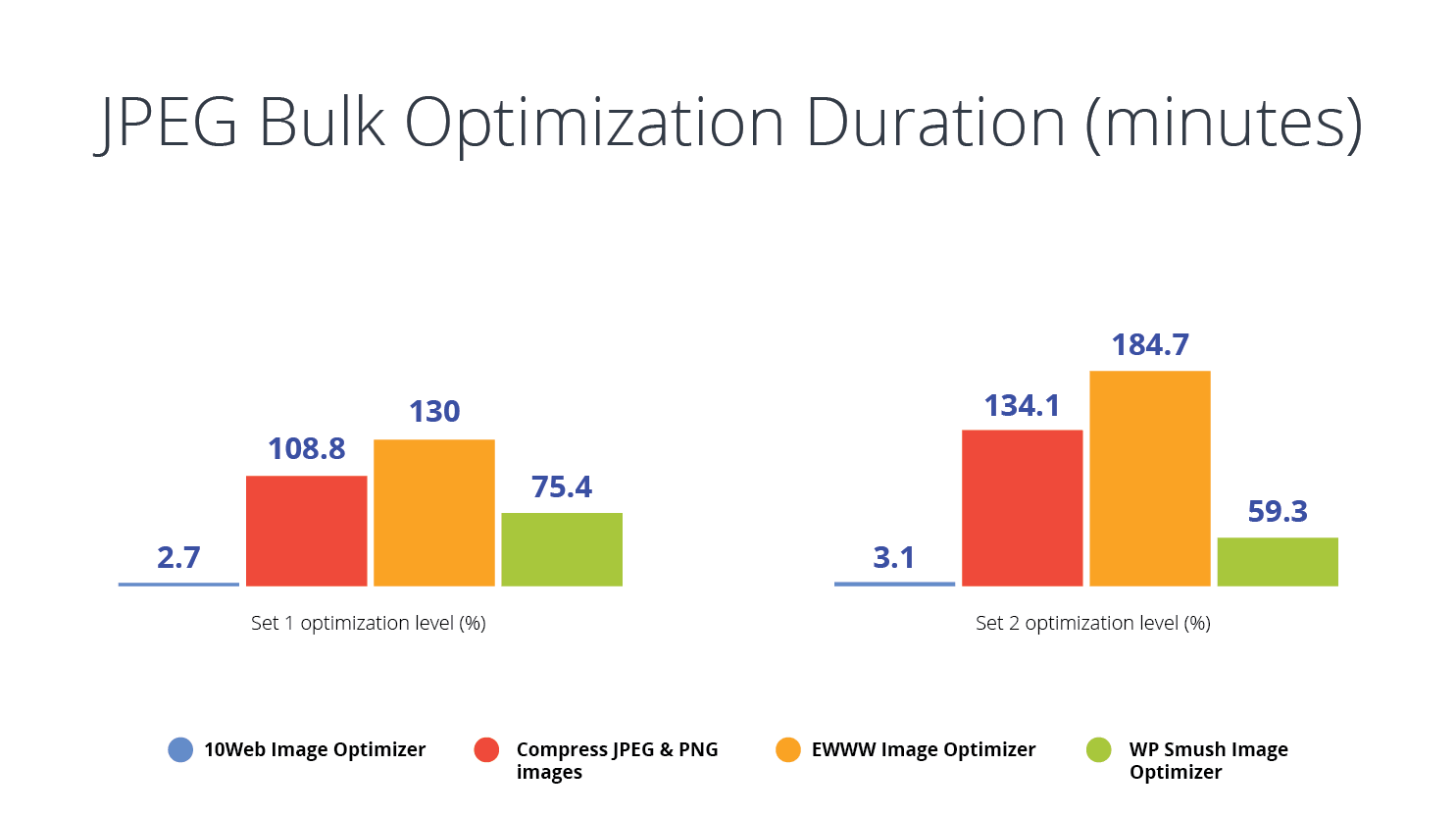 EWWW, the second image optimizer by the number of active installations, was the slowest plugin: it took more than 3 hours to optimize Set 2, which is around 60 times longer than 10Web Image Optimizer.

When it comes to PNG optimization, all of the optimizers perform more or less similarly, on average reaching a 73% reduction, though again, 10Web Image Optimizer was the winner, with 89%, while the rest ranged between 66% and 69%. 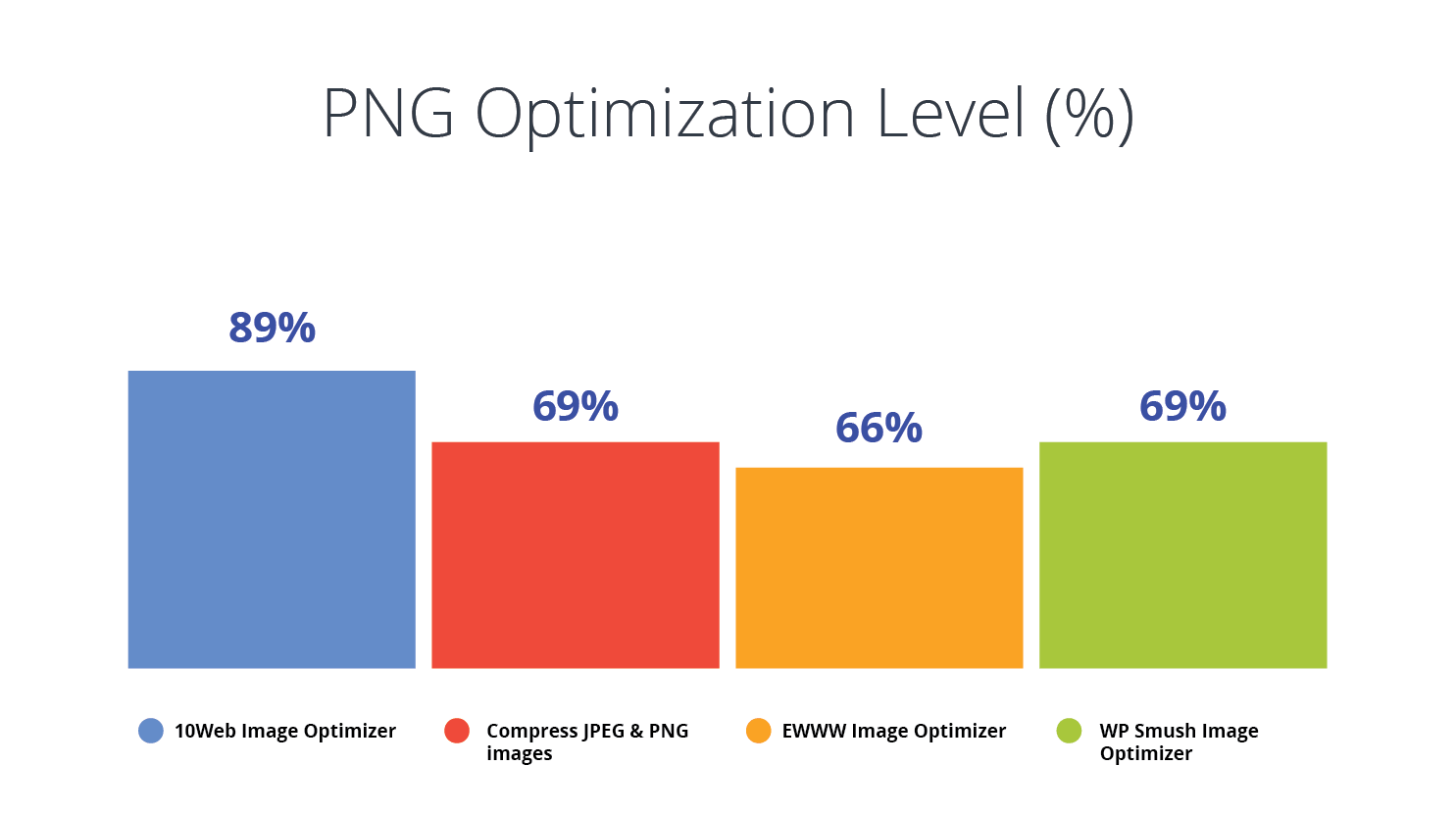 The overall level of GIF optimization was quite low compared to other types of images. For example, although Smush and EWWW offer GIF optimization, they almost do not optimize, reducing 10-15KBs from a 6MB GIF image.

Compress JPEG & PNG images does not optimize GIF at all, and 10WEB Image Optimizers performs only a lossless optimization with a reduction below 0.5%.

To sum up, there’s a number of serious reasons to consider optimizing your website images — it’ll improve your load times, reduce consumed bandwidth, and significantly improve your visitor experience.

Image optimization is a vital part of on-page SEO.

This is important for reducing the bounce rate, improving conversion rate, and search engine ranking of your website. After this key step, you can move onto other on-page optimizations like split testing and usability testing.

If you’re still not convinced, install one of the image optimizers, optimize your images, and check out how your website’s load score improves (you can check it here). That will directly impact your visitor experience and site statistics.

Ultimately, 10Web Image Optimizer is the rising star among its competitors.

Currently, it has more than 30,000 active installations but is growing very fast and will soon catch up with the leaders.

This plugin demonstrated much better results during the bulk optimization tests, both in compression rates and especially speed, which exceeded that of the competitors 20 to 60 times.